Does my child suffer from BO?

Does my child suffer from BO?

What do we have to do if BO or any rare lung disease is suspected?

Your child has had a respiratory infection and has been coughing for several weeks. She / he can no longer romp around, suffers from shortness of breath and exhaustion during little exercise. She / he becomes tired more quickly and needs many more breaks during and after any sport. At night, your child is restless and cannot sleep throughout the night. Until now, any therapeutic attempts have brought non or just little improvement.

Such or similar symptoms can indicate the presence of (post-infectious) bronchiolitis obliterans (BO). Even after lung or bone marrow transplantation, aggravated or accelerated breathing can be a sign of BO.

In such a situation, a specialist can help to find out the right diagnosis by conducting further specific investigations such as physical examination, lung function testing, chest X-ray examination, allergy and sweat tests and other lung and airway specific examinations.

BO typical findings would include significant narrowing of the small airways (bronchial tubes) and signs of hyper-inflation in the lung function testing. The chest X-ray can be difficult to assess but may show evidence of bronchiectasis and unevenly distributed consolidations. If BO is strongly suspected, a chest HR-CT (High Resolution Computer Tomography) should be performed and would show a typical mosaic pattern and signs of hyperinflation. Some hospitals could also analyze your child’s sputum (the mucus which your child could cough up). In BO, mucus often contains a large number of neutrophils (specific defense cells).

Bronchiolitis obliterans (BO) is a chronic, inflammatory disease of the small and very small airways in which inflammation leads to scarring process and ultimately to an irreversible obstruction of these small airways. The large airways, on the other hand, often show only mild or even no involvement.

BO can be provoked by different causes of which all start with an injury to the inner surface of the small airway, the bronchial epithelium. Particularly patients after lung transplantation have a high risk to develop BO as part of a rejection. In addition, patients who have received haematopoetic stem cell transplantation do have a risk, too to develop BOS (Bronchiolitis obliterans syndrome) as part of a chronic Graft-versus-Host Disease (GvHD). BO can also be caused by severe respiratory tract infections, especially after a severe infection with adenoviruses or mycoplasma. In rare cases, BO may also be triggered by inhalation of toxins, dust or gases, drug side effects, vascular collagenosis (connective tissue diseases), and chronic aspiration.

Although classifications by causes could help to diagnose and grade conditions, the clinical course of BO varies very much which can lead to delayed diagnosis and limits therapeutic options.

As mentioned earlier, Bronchiolitis obliterans syndrome (BOS) is often referred to after a lung transplantation. After lung transplantation, patients are closely monitored and regular and detailed lung function measurements are performed to detect BOS early. BOS presents with a sudden drop in FEV1 (one-second capacity) and is the most common cause of transplant failure. If FEV1 continues to decrease, a lung biopsy must be performed to look for chronic rejection, i.e. BO. Various causes have been described however the mechanism is not yet fully understood.

If you or your child’s doctor suspects that your child may suffer from BO or any other rare lung disease, we strongly recommend that you consult a specialist in pediatric lung diseases. The specialist can discuss further investigations, treatment options and possible prognosis with you and your child.

If you would like us to assist you in finding a specialist for pediatric lung diseases, we will be happy to help you. Here you can get an overview of the German competence centers. However, you can always contact us directly if you have any further questions.

In close cooperation with the University Children’s Hospital in Frankfurt, we have compiled an information sheet which will help you prepare for your first appointment at the specialist center for pediatric lung diseases. 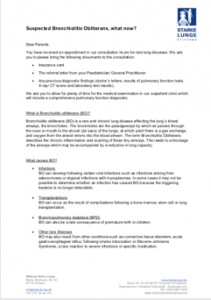 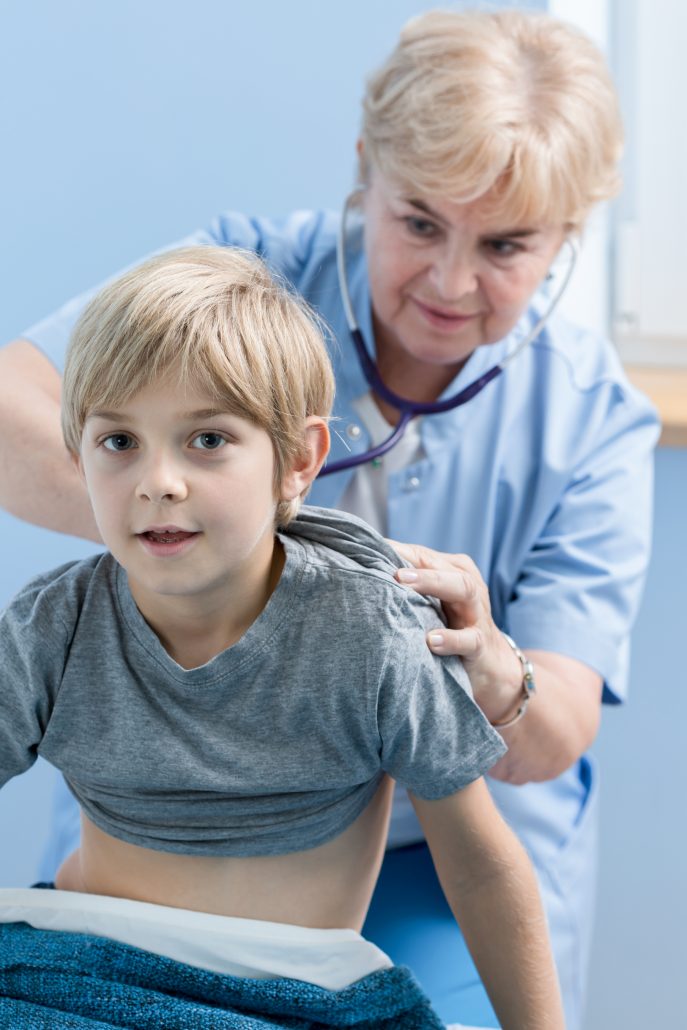 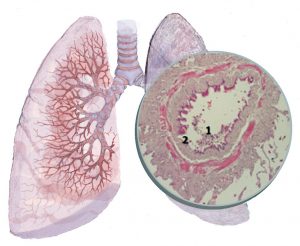 >6 weeks after Infect there is still coughing